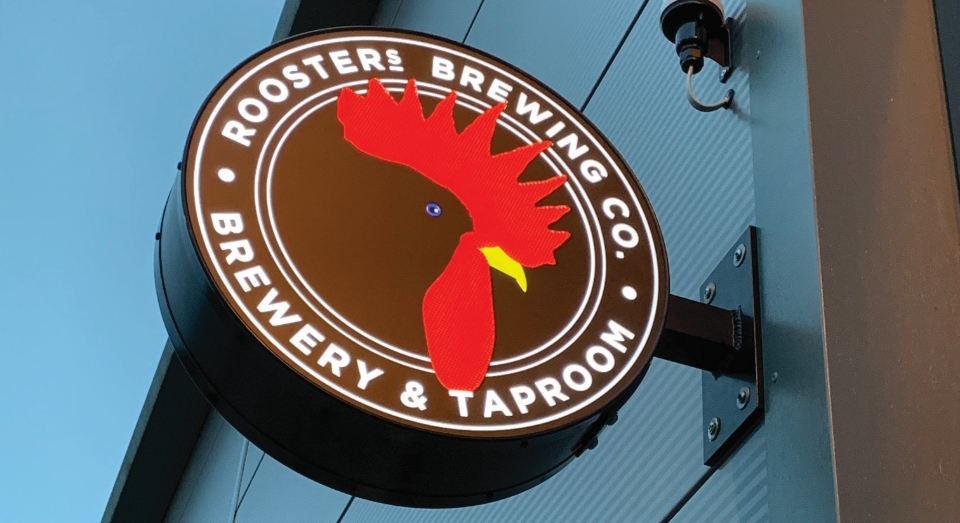 Rooster’s Brewing Co. have completed phase one of their move from Knaresborough to Hornbeam Park, with the opening of their brewery Taproom. Located on Fifth Avenue, on the southwestern corner of the business park the new bar boasts a spectacular viewing window into the brewery, as well as a superb south facing beer garden. A selection of Rooster’s beers are available in both cask and keg, whilst the taproom also stocks a selection of wines, gins, ciders and soft drinks.

The Taproom will be open every day, except Mondays and Tuesdays, opening from 4pm on Wednesday and Thursday and from noon on Friday, Saturday and Sunday. Tom Fozard, Commercial Manager, who will oversee the Taproom, said “Having visited many brewery taprooms on trips to the US, I’m really excited that Rooster’s is now able to bring the concept to Harrogate. From running various events at our site in Knaresborough, we’re aware that consumers are increasingly interested in provenance and being able to sample beer fresh from its source forms part of that experience.”

The brewery is still under construction, with completely new brewing vessels, a steam boiler and grain handling equipment currently being installed. Oliver Fozard, Head Brewer is overseeing the installation and said “we’re really proud that all of our new equipment is being sourced from UK manufacturers – our aim is to get it fully commissioned as soon as possible, with the move from our current Knaresborough production site scheduled to take place over the next couple of months.”

The move is an ambitious one for Rooster’s, family-owned and proudly independent, who have been based at Grimbald Park Knaresborough for 18 years, having originally been established on Claro Road in Harrogate in 1993. “We were faced with a major challenge as we outgrew our existing site”, commented Rooster’s Director, Ian Fozard, “as there is very little suitably located industrial land in the Harrogate area. We were looking for a larger space that also had the potential for a Taproom to showcase our beers to the public. Fortunately, the site at Hornbeam Park became available.”

BACK TO PARKLIFE
QUICK ENQUIRY CALL ME BACK

Please fill in the form below and we will get back to you as quickly as possible.

Request a Call back

To request a call back please fill in the form below.

Any cookies that may not be particularly necessary for the website to function and is used specifically to collect user personal data via analytics, ads, other embedded contents are termed as non-necessary cookies. It is mandatory to procure user consent prior to running these cookies on your website.